Please use Back Button to return to previous page

Wings: How they really work?

given by Dr Holger Babinsky of Cambridge University

To an audience of close to 100 members Dr Babinsky opened our 2009-2010 season with an enthralling talk about how wings really work. He asked us if we really understood how the wings of such a big and heavy aircraft as a 747 kept it in the air. He opined that if we had gleaned our understanding of the functioning of wings from most popular books on aerodynamics (and indeed some of the more professional books such as pilot training manuals etc) then sadly the explanation given was more than likely incorrect!! The aim of his talk, he stated, was to put the record straight and to give us an understanding based on sound principles. 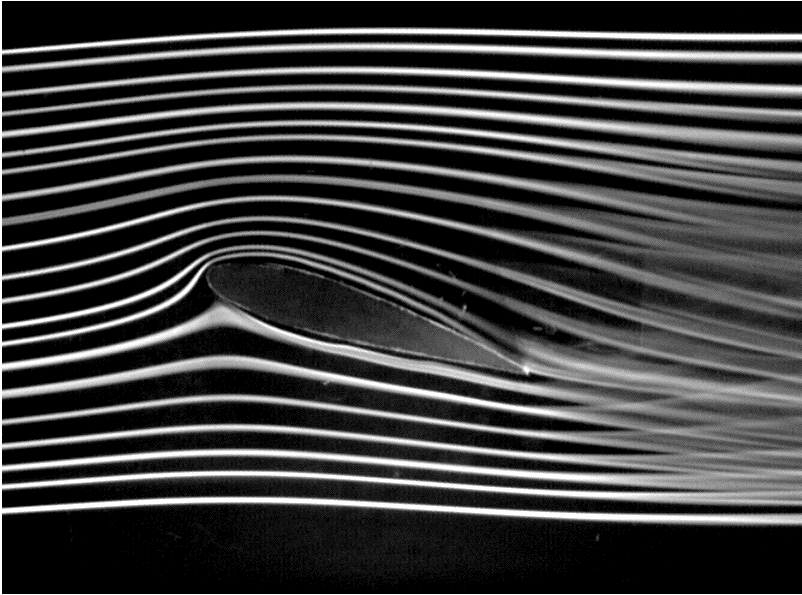 He started the main body of his talk by asking us to consider air flowing over a wing. This he did by showing us an example of a wing cross section in a wind tunnel; his own. Clearly the lift on a wing is related in some way to the difference in behaviour of the flows above and below the wing. He said that the conventional, but incorrect, explanation relied on several false assumptions. The first is that lift comes by assuming that pkts of air passing over and under a wing travel by different path lengths because the top surface is more curved than the bottom surface. Hence the air must be travelling faster over than under the wing and hence the pressure is lower above the wing than below it. He then asked us how we explained how a sail worked on a sailing boat where the sail (in this case the "wing") is very thin and where from empirical observation it is known that the flow follows the sail closely on both sides of a sail and we know that sails are very good at producing lift. Clearly this assumption must be wrong!

The second assumption that is often used, he stated, is that the pkts of air flowing above and below the wing take equal times to traverse a wing. He produced evidence from his own wind tunnel that categorically disproved this assumption. This is given in the picture below.

In this illustration a) shows the air before it arrives at the leading edge of the wing, b) shows the air when it is part way over the aerofoil and c) shows the case when the slowest moving air has just reached the wing's trailing edge. Clearly from this picture the assumption is manifestly incorrect!! So where do we go from here?

In his opnion the only way to start a proper explanation, he stated, was to go 'back to basics' i.e. the fundamental laws of physics and some very basics assumptions about fluids. He started by saying that, as we were dealing with slow (relative to the speed of light!) moving objects in a medium that was to all intents and purposes continuous in its properties, we can understand what is happenning using the classical laws of physics and the model of a continuous fluid. He then stated he would initially simplfy matters still further by assuming that the fluid was frictionless and not subject to significant changes in gravitational forces.

He asked us to consider what was going on locally in a fluid by looking at a very small packet of it and looking at the forces acting on it. The packet had to be small enough that the only changes that mattered were of first order e.g. the pressure gradient. Looking at the packet moving along a streamline Dr Babinsky using Newton's second law came up with the very important relationship known as Bernuilli's equation i.e.that the local static pressure plus the local kinematic pressure is a constant.

This means that if the fluid speeds up on a streamline the pressure must drop and vice versa. Dr Babinsky stressed that this rule ONLY APPLIES ALONG A STREAMLINE NOT BETWEEN STREAMLINES!! Hence the incorrectness of many of the explanations mentioned earlier that were based on applying this relationship betweeen flows above and below a wing i.e. between streamlines! Much to the delight of members, Holger demonstrated Bernoulli's relationship using a Venturi tube.

Dr Babinsky then examined the behaviour of the flows across a streamline, the so called "cross flows", and showed that, by balancing the centripedal force on the packet against pressure gradient forces, a pressure gradient must exist that is directly proportional to the square of the flow velocity and inversely proportional to the radius of curvature. This means highly curved flows have large pressure gradients and vice versa. The sign of the gradient is such that the pressure drops as the top of the wing is approached from above. Hence if a wing of the shape shown in our wind tunnel pictures is used the pressure above the wing is much less than below the wing because the top surface is more curved than the underside; thus lift on the wing.

Clearly though this first principles approach gave a basically correct explanation of lift Dr Babinsky stated that it ignored some really important features of practical aerodynamics such as the fact that real air did have viscosity and was compressible. These features were needed to explain energy loss due to vortex generation and shedding from a real wing, how the flows along a wing really behaved (the need for a so called "boundary layer"), the detailed mechanisms that took place in a stall and how supersonic flight happened. Dr Babinsky dealt with several of these topics during an enthusiastic question time at the conclusion of his talk.

Using this approach, Dr Babinsky, then went on to describe how the ideas correctly predicted what happened when flows occurred over very thin aerofoils, how the angle of attack mattered and how this could be exploited for proper inverted flight. He finished his talk by applying this approach to rotating spherical objects such as spinning table tennis balls. He showed that a force must exist transverse to the motion of such a ball if its spin was perpendicular to the line of motion; the resulting force being perpendicular to the direction of spin and to the line of motion; this is the so called "Magnus effect". Much to the amusement of the audience he concluded his talk by demonstrating this effect by shooting spinning table tennis balls above their heads from a high pressure gun designed to embark spin on the balls. As has been mentioned earlier there was a very lively questime at the end of Holger's talk. Dr Babinsky was thanked on behalf of the members present by our Membership Secretary, Nigel Ratcliff.