Please use Back Button to return to previous page 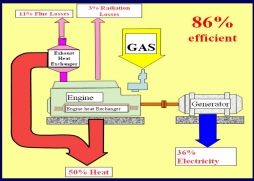 Despite the very difficult conditions facing members getting to and potentially from the Holiday Inn attendance was well over 70 people present for Martyn's presentation.

While Combined Heat and Power, or CHP as it is sometimes abbreviated to, is becoming familiar to traditional engineers with the increasing need for better energy conversion efficiency, I expect that many in the audience may have had little idea of what a biomass plant was. In this context, Martyn’s opening remarks that, due to problems, the UEA plant was behind schedule and still not commissioned, may have added further doubt. However, we soon learned that in this case, biomass was woodchip waste from two local sawmills which contrary to expectation, was not burnt to release energy, but fed to a reactor under semi anaerobic pyrolysis conditions to convert it to a combustible gas.

Having thus enlightened us, Martyn then stepped back, timewise, to describe UEA’s energy needs, which are substantial. The now ‘Listed’ academic block, which follows the sloping site like an elongated staircase on its side, is a 60’s built, single glazed, concrete structure with disastrous(Martyn’s word) thermal losses. While some more recent buildings are much more thermally efficient, the Sports Complex also has a considerable operational energy requirement. Overall site requirements for heating equates to 42,000 MWh p/a, and for lighting to 32,000MWh p/a, which means that UEA’s energy needs are similar to those of a small town! However, apart from its heating, lighting and power requirements, there is also a substantial need, especially during summer months, for building and equipment cooling. The continuing expansion in student numbers and added buildings and facilities to accommodate them led the University to an early decisions to become more self sufficient in meeting energy needs which resulted early in the present century to installation of a gas-fired CHP system. This, combined with the heat recovery from the District Chilling Circuit installed in 2004 has enabled UEA to make considerable savings in its energy bill.

The Biomass project continues UEA’s desire to maintain the trend to greater self-sufficiency. However, the first stage production of the input gas on site, breaks new ground, at least on the scale required to fulfil the requisite energy output, to assist meeting the predicted energy gap in UK energy availability in the next ten years. With increasing reliance on imports with possible problems of guaranteed non-interruption, the university made a brave decision to proceed with biomass. Sawmill waste provides an excellent, cheap, local source. At present, with no local use of this waste product, it has to be transported as far as Scotland where it is made into fibreboard; its low bulk density makes this expensive. The UEA plant’s input requirements should be met by two lorry load deliveries daily and, additionally, it should have the capability of operating on other waste inputs, such as shredded graded refuse, should local sawdmill supplies become difficult. Another advantage of the biomass route is its potential carbon sustainability.
At the heart of the UEA Biomass plant is a pyrolysis reactor; but it is worth mentioning that the unit at UEA is the first ‘commercial scale’ installation. Notwithstanding the above caveat, small scale trials indicate that the reactor is tolerant to considerable variation in feedstock moisture. As can be seen, the input is dried before pyrolysis takes place in the steam atmosphere from the drying stage, after which injection of a controlled supply of preheated air oxidises the pyrolysed product to produce a char which then reacts with steam to form a combustible gas consisting of carbon monoxide and hydrogen, in a manner similar to the Water Gas producer of yesteryear.

The hot gas is fed to a 124 litre V20 twin turbocharged Austrian Jenbacher gas engine which is the power source of the new CHP unit. Jenbacher engines are well proven and reliable, but very noisy. In view of this the whole unit is installed in a new twin-walled, sound insulated building at the end of the car park, so that lorry access is easy.

As mentioned in the initial remarks, the plant has yet to be commissioned and its operational performance established. Perhaps surprisingly, unexpected problems have arisen with the transfer of the feedstock from storage hopper to the reactor. The company supplying the spiral lift shaft to move the material from hopper bottom to reactor top appear unable to overcome packing leading to seizing in the lower part. 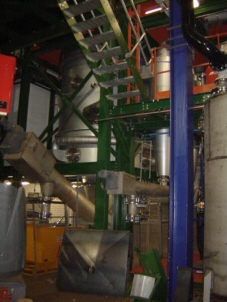 This led to lively discussion with several members who suggested that using a vertical shaft was the cause; for centuries, Archimedian screw transfer has worked successfully with a wide range of materials at angles of up to 30 degrees. Martyn responded that the company commissioned to supply this item claim to be leaders in the field, but having made numerous modifications, now have a further week to provide a successful solution. If not, he felt that he would resort to simple bucket chain arrangement. We could feel his frustration!

So, it appears that we have to await the eventual trials before we shall know if the target efficiency of the overall system will be met. Martyn remains confident, in which case we can look forward to seeing everything working during a forthcoming summer visit. Meanwhile, Martyn mentioned that members may find further information on the web (www.youtube.com).

Martyn was thanked on behalf of all the members present by Past President Chris Hoskins for his enthusiastic and informative presentation and for the energetic way he handled the Q&A session that took place immediately after his talk had concluded.